New research from Higher Education Publications, Inc., indicates that the number of women in presidential positions at the major research universities is decreasing. The analysis tracked presidents of the 115 colleges and universities in the United States that are Carnegie classified as doctoral research, highest activity institutions. Carnegie classified doctoral institutions include schools that award at least 20 research/doctoral degrees during a given year, such as Princeton, Stanford and Michigan.

The report, based on information from the HigherEd Direct Database, examined Carnegie classified doctoral universities from 1988 to the present. Currently, 16 of the 115, or just under 14% of institutions listed, have female presidents. The number of women in chief executive positions peaked from 2009 through 2012, when 23 of the 115 schools had women as presidents. The lowest year for female presidents was in 1994, with only 4 female and 111 male presidents.

Data from the study shows significant growth in the number of female presidents from 1988 to 2012, when it topped out at 20%. Since then, the percentage of females in presidential positions at doctoral universities has trended downward, to under 14%. 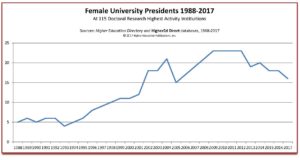 Conversely, according to a report by the American Council on Education, 30% of all colleges and universities in the U.S. have female presidents, with the most (36%) at associate institutions. The ACE Report also shows continuous growth in the percentage of female presidents in the last 30 years, from 9.5 % in 1986 to 30% in 2016. 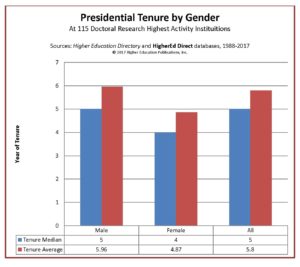 While the percentage of women in presidential positions at colleges and universities has grown in the last thirty years, research from Higher Education Publications, Inc. indicates a major disparity between top research institutions and other higher education institutions. While the Ivy league has made progress in gender diversity—four out of the eight schools are run by females—overall, just under 14% of college presidents are female at top doctoral research institutions, while the rest of the country is at 30%.

The HigherEd Direct Database was used to compile information in this research article: for a free trial click here .

Want to join the discussion?
Feel free to contribute!