New research from Higher Education Publications, Inc. indicates that the number of women in college athletic director positions has almost doubled since 1990.  Our analysis tracked athletic director data dating back to 1990 and found that the rate of female ADs has grown from 11% to 19.5% overall at NCAA colleges and universities in the United States.

Based on college administrator data from the HigherEd Direct Database, the report examined athletic directors in Divisions I, II, and III from 1990 until July of 2018. Currently, 200 of the 1022—or just over 19% of institutions listed, have female athletic directors. 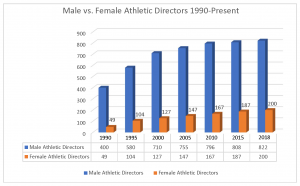 More specifically, the number and percentage of female ADs currently at Division I, II, and III schools are:

In the so-called “Power Five Conferences” of the ACC, Big Ten, Pac-12, Big 12, and SEC, the numbers are lower with only five of the 65 athletic departments (7.6 %) being run by women—North Carolina State, Pitt, Penn State, Virginia and Washington. According to Penn State Athletic Director Sandy Barbour, one reason is the stereotype of football and the culture of the programs that surround it. Barbour said, “There is this notion that because women, in general, don’t play football, how would you administer or supervise it?”

Another obstacle inhibiting female athletic directors is the fact that the college administrators doing the hiring–chancellors and presidents–are disproportionately male as well. According to a previous report, presently only 16 of the 115 major research universities (schools such as Stanford, Michigan and Clemson) have female presidents. And According to the American Council on Education, 30% of all colleges and universities in the U.S. have female presidents (up from 9.5% in 1986).

Though slow, over the past two decades, the growth and progress made in the overall amount of female college presidents and athletic ADs is increasing, and many believe that the nature of hiring at the once male dominated position(s) is changing. Three of the top 15 schools in the final 2017 Associated Press football poll had female athletic directors. The ACC especially has made strides in hiring female ADs. Most Recently, UVA offered the top job to Carla Williams, making her the third female director in the conference after Pittsburg and NC State.

With as the number of sports fans and female athletes continuing to grow, the changing of perceptions and growing female representation in athletic programs will continue to follow, though it won’t be easy. Patti Phillips, CEO of the National Association of Collegiate Women Athletics Administrators (NACWAA) says, “The athletics world is realizing that women as athletic directors are doing a pretty good job and that they are very positive leaders who develop good programs,” she says. “… A woman’s voice in the department of athletics needs to be heard.”

The HigherEd Direct Database was used to compile information in this research article: for a free trial of the most accurate tool for communication in higher ed click here .

Want to join the discussion?
Feel free to contribute!